All Saints’ Church, Puerto de la Cruz proudly proclaims itself to be an “Anglican Church within the Diocese in Europe”. So what does this mean for the church? For you?

Actually, lets start with YOU. The main thing you should know, whether you identify as an Anglican, a Scottish Presbyterian, a member of the Lutheran Church of Sweden, or any other Christian denomination, is that saying All Saints is Anglican, is not a mark of exclusivity.  Nobody is going to say you are not welcome, because you are not a “card-carrying Anglican”.  You ARE welcome!  By coming to an Anglican Church, you are actually joining a group of over 70 million Christians, in 165 different countries!

The word “Anglican” comes from Latin, the “Ecclesia Anglicana”, literally “The English Church”.  In fact, there has been a Church of England since a long time before Henry VIII’s reformation – St Augustine was sent to England in 597AD to convert the English, and found that there were already Christians of the Celtic Church in Britain!  The reformation in England in the 16th century took a very different route from the Lutheran and Calvinist reformations in mainland Europe. Anglicans enjoy a reformed (“protestant”) biblical theology, coupled with a “catholic” church structure (of Bishops, Priests, and Deacons) and an emphasis on liturgical sacramental worship.  In short, Anglicanism is an inclusive worldwide faith with a deep sense of pastoral care for everyone.  In fact, it means there is something for people from many backgrounds! 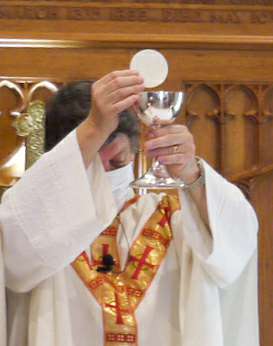 Anglicans believe that the central thing we do as Christians is to gather together for prayer and worship.  In most churches, our main opportunity to do so is the Sunday morning service.  This is the main time during the week when we come together as a community.  In most churches, the service is a Holy Communion service, sometimes called the Mass, the Lord’s Supper, or the Eucharist.  Sometimes, as at All Saints’, there is an early “said” service, followed by a later “sung” service.  Many congregations also have different kinds of worship, bible study, prayer groups, activities and events during the week.  Everyone is welcome to participate, and all believing Christians are welcome to receive Holy Communion or a Blessing during services.

Perhaps the greatest glory of the Anglican Church is the richness and variety of its life.  This can lead to tensions and disagreements, but for the most part it allows individual Anglicans and local churches to celebrate their Christian faith in ways most appropriate to themselves.  In the Church of England, this means that neighbouring parishes often have a very different atmosphere or ‘flavour’.  In one, you may find a “Praise Band” of guitars and drums, and a very casual way of dress and behaviour.  In another, there may be a much more traditional feel, with an organ, choir, candles, incense, and coloured robes (vestments) for the ministers.  Both styles have an important contribution to make, and both are truly Anglican.

The Diocese in Europe, to which we belong, has an interesting history.  Before the Reformation, as everybody worshipped in Latin, it didn’t really matter which church you went to!  After the reformation, however, when people from England wanted to worship in their own language, Anglican Chaplains began to minister in different European cities, and beyond.  Possibly the oldest Anglican Chaplaincy in Europe is St Thomas Becket in Hamburg, dating from 1611 (and known then simply as The English Church), when members of the Company of Merchant Adventurers were granted “the privilege of holding services in the English language according to the rites of the Church of England” by the Senate of Hamburg.  In 1633, all chaplaincies in Europe were put under the jurisdiction of the Bishop of London.  The Diocese of Gibraltar, was formed in 1842, but at that time, the Canary Islands and Madeira came under the Bishop of Sierra Leone.  At the back of All Saints, near the Font, is a copy of the Deed of Consecration of our church (1903), signed by the Rt Revd Ernest Graham Ingham (Bishop of Sierra Leone).

Our diocese (known officially as The Diocese of Gibraltar in Europe) is geographically the largest diocese in the Anglican Communion, covering around one-sixth of the Earth’s landmass!  According to Wikipedia, there are 295 churches or congregations and the diocese stretches from the Chaplaincy of Reykjavik, the most northerly and westerly, to Playa del Ingles, (part of the Gran Canaria Chaplaincy), the furthest south, and, in the east, the Chaplaincies of St Andrew’s Moscow, and those bordering the Caspian Sea.

To sum up, and indeed, something to celebrate – being an “Anglican Church within the Diocese in Europe” makes us, as a church, and as individuals, members of a huge, very diverse and inclusive Christian family!

Thanks to the Church of England (Diocese of Portsmouth), and the Anglican Church of Canada (Diocese of Toronto), for permission to use information from their websites, and to Wikipedia.