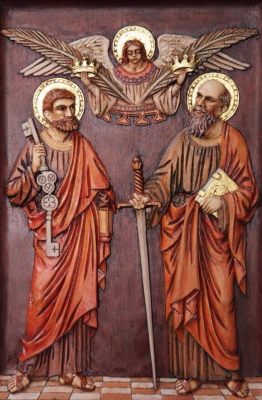 Today the Church celebrates two great saints, St Peter, one of the first disciples, and St Paul, who never met Jesus, and initially opposed the Christian community, until a dramatic experience converted him to the faith.  In the picture, we see them traditionally represented.  St Peter is carrying two keys, as Jesus says in today’s gospel reading, “I will give you the keys of the kingdom of heaven”.  St Paul is carrying a sword representing his martyrdom for the faith, which tradition holds was done by beheading.

The Collect for SS Peter & Paul

Almighty God, whose blessed apostles Peter and Paul glorified you in their death as in their life:  grant that your Church, inspired by their teaching and example, and made one by your Spirit, may ever stand firm upon the one foundation, Jesus Christ your Son our Lord, who is alive and reigns with you, in the unity of the Holy Spirit, one God, now and for ever.  Amen.

It was about this time that King Herod arrested some who belonged to the church, intending to persecute them. He had James, the brother of John, put to death with the sword. When he saw that this met with approval among the Jews, he proceeded to seize Peter also. This happened during the Festival of Unleavened Bread. After arresting him, he put him in prison, handing him over to be guarded by four squads of four soldiers each. Herod intended to bring him out for public trial after the Passover.

So Peter was kept in prison, but the church was earnestly praying to God for him.

The night before Herod was to bring him to trial, Peter was sleeping between two soldiers, bound with two chains, and sentries stood guard at the entrance. Suddenly an angel of the Lord appeared and a light shone in the cell. He struck Peter on the side and woke him up. “Quick, get up!” he said, and the chains fell off Peter’s wrists.

Then the angel said to him, “Put on your clothes and sandals.” And Peter did so. “Wrap your cloak around you and follow me,” the angel told him. Peter followed him out of the prison, but he had no idea that what the angel was doing was really happening; he thought he was seeing a vision. They passed the first and second guards and came to the iron gate leading to the city. It opened for them by itself, and they went through it. When they had walked the length of one street, suddenly the angel left him.

Then Peter came to himself and said, “Now I know without a doubt that the Lord has sent his angel and rescued me from Herod’s clutches and from everything the Jewish people were hoping would happen.”

For I am already being poured out like a drink offering, and the time for my departure is near. I have fought the good fight, I have finished the race, I have kept the faith. Now there is in store for me the crown of righteousness, which the Lord, the righteous Judge, will award to me on that day—and not only to me, but also to all who have longed for his appearing.

But the Lord stood at my side and gave me strength, so that through me the message might be fully proclaimed and all the Gentiles might hear it. And I was delivered from the lion’s mouth. The Lord will rescue me from every evil attack and will bring me safely to his heavenly kingdom. To him be glory for ever and ever. Amen.

When Jesus came to the region of Caesarea Philippi, he asked his disciples, “Who do people say the Son of Man is?”

They replied, “Some say John the Baptist; others say Elijah; and still others, Jeremiah or one of the prophets.”

Simon Peter answered, “You are the Messiah, the Son of the living God.”

Jesus replied, “Blessed are you, Simon son of Jonah, for this was not revealed to you by flesh and blood, but by my Father in heaven. And I tell you that you are Peter, and on this rock I will build my church, and the gates of Hades will not overcome it. I will give you the keys of the kingdom of heaven; whatever you bind on earth will be bound in heaven, and whatever you loose on earth will be loosed in heaven.”

Intercessions for today – the Feast of SS Peter & Paul

Father, your Son called men and women to leave the past behind them and to follow him as his disciples in the way of the cross. Look with mercy upon those whom he calls today, marks with the cross and makes his disciples within the Church …

Your Son told his disciples not to be afraid and at Easter breathed on them his gift of peace. Look with mercy upon the world into which he sent them out, and give it that peace for which it longs …

Your Son formed around him a company who were no longer servants but friends, and he called all those who obeyed him his brother and sister and mother. Look with mercy upon our families and our friends and upon the communities in which we share …

Your Son sent out disciples to preach and heal the sick. Look with mercy on all those who yearn to hear the good news of salvation, and renew among your people the gifts of healing …

Your Son promised to those who followed him that they would sit on thrones judging the twelve tribes of Israel and would share the banquet of the kingdom. According to your promise, look with mercy on those who have walked with Christ in this life and now have passed through death to eternal life …

Almighty God, you have built your Church upon the foundation of the apostles and prophets, with Jesus Christ himself as the chief cornerstone: so join us together in unity of spirit by their doctrine, that we may be made a holy temple acceptable to you.

Merciful Father: accept these prayers for the sake of your Son, our Saviour, Jesus Christ. Amen